Textiles have been a 50 year passion for Paul Reeves, starting when he was a young and influential clothes designer in the 1960s.

The upcoming auction is his determined aim to establish Textile Art rightly alongside the Decorative & Fine Arts.

All the pieces will be presented in a manner which makes them eminently usable and ready to hang, many framed, others mounted  to display with great effect in either modern or period settings.

The pieces will be chosen from his renowned and vast collection, spanning some 100 plus years of Textile Design.

There will, of course, be examples of work by William Morris, Walter Crane and C.F.A.  Voysey from the late 19thcentury, but pieces from the 1920s and 30s and beyond will surprise as will 1960s embroideries by Beryl Dean, who studied at The Royal School of Needlework and 1980s works by  Joy Clucas of the 52 Group and the Manchester Embroiderers’ Guild.

Textiles by painters such as Raoul Dufy, Salvador Dali and Alan Reynolds will illustrate the cross over already established between the different fields of art. These will show that the link between Fine and Textile Art was already made but overlooked by the art establishment.

I love textiles, their feel and colour, their mood enhancing and aesthetic properties. The importance of textiles to human beings is nearly as old as Homo Sapiens itself. Once the art of weaving had been discovered it was only a matter of time before the introduction of art into weaving. Before long, embellishments such as embroidery, painting and printing […]

A Pair Of Red Earthenware Vases With Sgraffito Decoration On Cream Slip Designed By E.W. Godwin For William Watt & Co circa 1880 Incised marks to bases: “J.G. & E.W.G.” and “W.W.”

A pair of French ‘Faux’ tapestries 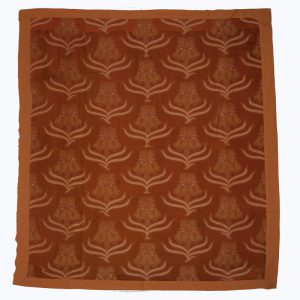 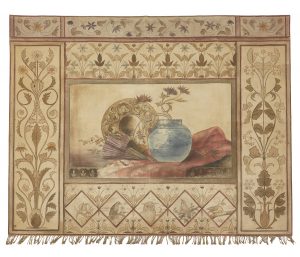